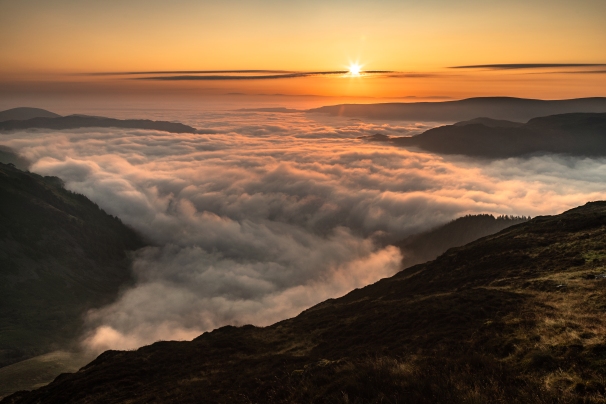 The story of how a working-class lad from the East Midlands overcame bereavement, redundancy and health scares to become Britain’s foremost mountain filmmaker is told for the first time in a lavishly illustrated book to be published next month

In his autobiography Life on the Mountains, Terry Abraham, producer of the acclaimed Life of a Mountain documentary series, details his childhood, the impact that the death of his grandparents had during his formative years and how, in the aftermath of redundancy, he turned his life around to achieve his ambition to become a film producer.

The book is packed with anecdotes and insights into how he made the three films that secured him an international reputation. He reveals the hardships endured over the two years it took to make his debut film, ‘Life of a Mountain: Scafell Pike’. He spent many nights camped alone high on the mountains in the area, working to overcome technical challenges and loneliness while enduring wild storms and narrowly avoiding a near-death fall.

He tells how he was persuaded to take up his camera again to make ‘Life of a Mountain: Blencathra’ and how he believes the epic finale, Helvellyn, may serve as his legacy – his contribution to Lakeland mountain culture.

Life on the Mountains is an autobiography and coffee table book in equal measure, illustrated with more than 100 photographs of the Lakeland landscape taken during the decade in which Terry has been making his documentary series.

It’s published by Skelwith Bridge-based Inspired by Lakeland on 9 May, the day on which the third and final instalment in Terry Abraham’s Life of a Mountain trilogy, Helvellyn, had been due to receive its premiere at the Rheged Centre, near Penrith. The premiere was postponed due to government-imposed lockdown measures to staunch the spread of the coronavirus but Inspired by Lakeland proprietor David Felton decided publication should go ahead regardless.

He said, “When lockdown was announced we faced a tough call over whether to publish Terry’s book on 9 May or postpone it. We chose to go ahead, believing that those who love Lakeland – and particularly those not able to visit presently – would welcome the diversion from the gloomy news. It will also serve as a reminder of the high places that so many people regard as their spiritual home.

2020 will be a difficult year for Cumbrian business, not least those involved in publishing and selling books. By proceeding with our plans and shipping books nationwide we hope to play our small part in keeping the publishing embers burning until such time as the county and the National Park are able to welcome visitors again.”

Terry Abraham added, “The Lake District National Park is adored by millions of people across the globe. I take both solace and pride in how its wonderful landscapes have helped me over the decades and continue to do so. In the book I share many of the ups and downs, obstacles and difficulties I’ve had to overcome in both my personal life and in producing a series of documentaries about three iconic Lake District mountains.

This book is much like the Life of a Mountain series: it’s about a place of landscapes, and how their beauty can change people’s lives. Sadly, due to the current circumstances, visitors are unable to come and experience the Lake District’s joys but I hope the insights the book offers – into my life and how I produce my films – might inspire people and at the same time bring some much needed sunshine into their lives.”

Life on the Mountains is available for pre-order at www.inspiredbylakeland.co.uk; pre-ordered copies are signed by Terry Abraham.